Latex, also known as natural rubber, is the milky sap of the tropical rubber tree. The main countries cultivating this tree are Asia, Africa and Central America. Latex is still the most important starting material in the production of rubber. Modern life is virtually inconceivable without this raw material, so varied are the items for daily life we make from it. The industry is increasingly relying on special high-speed separators from Huading Separator to obtain latex efficiently.

Natural latex was once commercially produced in the Amazon in great quantities. In recent times, production of natural latex has moved to Malaysia, Indonesia, and other Far Eastern regions. More than 90% of the total world production of natural rubber now comes from Asia, with well over half of that total originating in these countries. Other leading Asian producers include Thailand, India, and Sri Lanka. China and the Philippines both have substantially increased their rubber production as well. This product is especially good for making rubber gloves, condoms, balloons or other molded thin-walled rubber items.

The process is as follows: after the rubber milk has been harvested, collected and transported to the production facilities, it is first stored in large sedimentation tanks to separate off impurities. After a certain settling period, the latex milk is passed to the separator system.

The separators separate the majority of the aqueous phase, the so-called “skim milk”, and other contaminants from the plantation milk. The plantation milk, also known as “field latex”, contains around 30 percent latex. After separation of the skim milk, the latex fraction in the concentrate increases to over 60 percent. Once stabilizing additives have been added, the concentrate is sold as commercially-available latex.

The LXTC400 is a solids-retaining disc-stack separator used for the process of latex concentration. It is specially designed for the tough process environments at modern latex
production facilities today. The LXTC400 latex separator consistently provides a separation efficiency above 90% during the entire operating cycle. 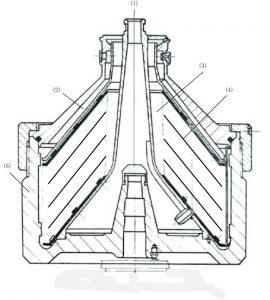 The feed is introduced to the rotating centrifuge bowl from the top (1) and is accelerated in a distributor before entering the disc stack (4). It is between the discs that the separation takes place.
The heavy phase and the heavier solids are forced towards the bowl wall where the solids accumulate.The light phase moves towards the center of the bowl, from where it is pushed out .