Baker’s yeast is a natural ingredient that has been used in bread-making and other bakery products for thousands of years. It is made up of colonies of micro-organisms that rapidly reproduce and start the fermentation process that naturally raises dough.

Baker’s yeast is the common name for the strains of yeast commonly used as a leavening agent in baking bread and bakery products, where it converts the fermentable sugars present in the dough into carbon dioxide and ethanol. Baker’s yeast is of the species Saccharomyces cerevisiae, which is the same species (but a different strain) commonly used in alcoholic fermentation, which is called brewer’s yeast. Baker’s yeast is also a single-cell microorganism found on and around the human body.

In the baker’s yeast process, Huading Separator, with its exhaustive expertise and extensive range of products, is able to meet even the most demanding customer’s needs of centrifugal separation when it comes to the efficient production of baker’s yeast. The important thing for Huading Separator is to ensure that each customer is able to obtain the best combination of machine size and process stages for their individual production needs. 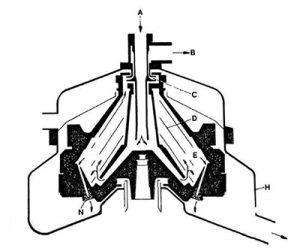 The feed containing the liquid and the solids is introduced to the rotating centrifuge bowl from the top via a stationary inlet pipe, and is accelerated in a distributor before entering the disc stack. Separation takes place between the discs. The light phase moves through the disc stack towards the centre of the bowl, and is pumped out under pressure by means of a centripetal pump. The yeast is collected at the bowl periphery and continuously discharged through the nozzles. Filler pieces prevent build-up of the solids between the nozzles.

How yeast is made - Lesaffre