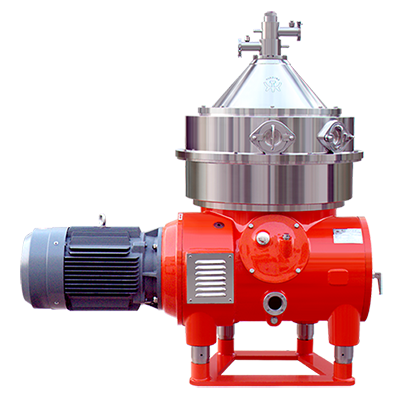 The PAND nozzle separator is used for recovery of palm oil from the settling tank underflow in a palm oil mill. This underflow is commonly called sludge water. PAND nozzle palm oil separator is sometimes installed to recover oil from the heavy phase of a three-phase decanter. The decanter has removed most of the oil and there is very little left for the PAND nozzle palm oil separator. The main task is to recover the oil in the third layer. The requested separation duty here is to separate between water and water with some oil containing suspended solids.
Separation is performed in a rotating bowl containing conical discs, where in the space between each disc the actual separation takes place. The liquid feed enters the bowl through a stationary feed pipe into a rotating distributor insert in the center of the bowl and then passes into the disc stack. Solids are continuously discharged through the peripheral nozzles. The nozzles discharge leaves the machine by gravity via an outlet in the frame. Water are forced towards the bowl wall where they are discharged under pressure through the centripetal pump. The concentrated oil is pumped out by a built-in centripetal pump as well. Should the oil and water content in the bowl move outwards, with the risk of oil being ejected together with the solids, water from the overhead balance tank will automatically enter the bowl and push the oil level back to the normal position.
By removing the nozzle holders from the outside and flushing the bowl with water while running at low speed the PAND nozzle separator can be cleaned without dismantling. In this way, machine down-time is reduced to a minimum.
In addition, the PAND nozzle palm oil separator comes with a CIP program. Flushing water is initially introduced into the feed inlet tube when the centrifuge is running at low speed over a few cycles to be followed later by introducing the flushing water into the clarified light phase (recovered oil) outlet through the disc stack when it is running at higher speed.
All liquid-wetted parts are of stainless steel. The frame is made of cast iron except the top part & frame hood which are of stainless steel. As a protection against erosion, the PAND palm oil separator contains several erosion guards and liners. 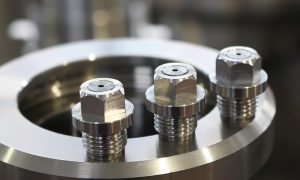 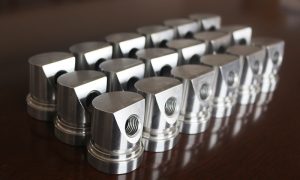 Both nozzle and insert bush can be used for other nozzle separators. More information, please contact us.