HUADING's separation equipment is designed to accommodate a variety of concentration, purification and clarification applications.
Contact us Get a quote

Since 1954, Huading Separators has been a leading provider of industrial separators and decanters. Our separator & decanter centrifuge equipment is designed for food, beverage, and chemical industry applications. They use centrifugal force fields to separate suspensions of two- or multi-phase liquids and solids of different densities. In other words, they can be used for liquid-liquid separation, liquid-solid separation, or solid-liquid-solid separation.

Huading provide a wide range of models to meet the specific needs of our customers. Our centrifuges are made of high-quality materials and are built to last. We offer a variety of features on our centrifuges, such as automatic loading and unloading, and self-cleaning cycles. Besides, our products are known for their quality and reliability, and we offer a comprehensive warranty to our customers. We also have a team of experts who are ready to help you choose the right separator for your needs.

We offer a wide range of custom options to meet the specific needs of our customers. If you’re looking for an industrial separator, Huading Separators is the perfect choice.

Under the impact of the centrifugal force,centrifuges are able to clean and separate or clarify liquids or to remove solids from liquids while making use of the physical gravity laws.

Continuous separation of liquids from liquids or of very fine particles from liquids, thanks to its ultra strong centrifugal force.

In terms of the difference of particle size,selecting appropriate filter medium,solid-liquid separation is achieved by the filtration process.

Customized and optimize performance of separators and decanters

Centrifugal Separation Technology is the most widely used method for separating fluids with different densities. It is also used in separating solids from liquids or solids from gasses.
The need to separate different liquid phases and solids from each other is part of practically every industrial process. Huading Separator has more than half a century of experience in meeting this requirement using either separator or decanter technology. And our products perform this crucial function exceptionally well.
The product range is based on centrifugal separation machines for separating liquids from each other or for removing solid particles from liquids. All these centrifugal separation machines are based on density difference.

Terminal free settling velocity of a spherical particle under gravitational force can be determined by the Newton’s law:

CD has been found to be a function of Reynolds Number. If the flow around the particle is laminar Re < 0.6 then CD =24/Re. In this case, we can reduce the equation of settling velocity to :

This expression is the Stoke’s law of the terminal settling velocity of a spherical particle under laminar flow conditions. 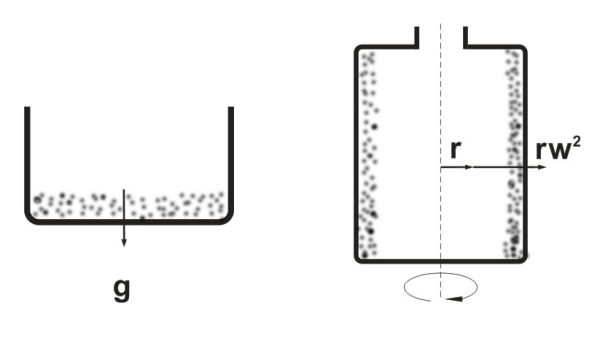 The factor Z= rω2/g specifies how much greater the sedimentation rate of a particle is in a centrifugal field as compared with the gravitational field.
The next figure illustrates a centrifugal separator for removing solid particles from liquids.

In essence, a centrifuge is a settling tank whose base is wrapped around a centre line. Rotating this entire unit rapidly means that the effect of gravity is replaced by a controllable centrifugal force that can have an effect up to 10,000 times greater.
This force is then used to separate liquids from other liquids and solids efficiently and with great accuracy, and in a manner that is easy to control.

In the centrifugal field, under the action of centrifugal force, when the denser solids are subjected to centrifugal forces, they are forced outwards against the rotating bowl wall, while the less dense liquid phases form concentric inner layers

Centrifugal separating technology utilizes fundamental physical laws and centrifugal force.
Centrifugal force is produced through rotation around an axis. The force generated through the rotation acts in an outward direction. Depending on the speed of the rotating body, it increases or drops on the circular path.
Mechanical separation technology makes use of this property when light, heavy or substances of different density have to be separated from each other.

Centrifugal forces in a vessel

The centrifugal forces act on all particles. The particles with the specifically higher weight are spun outwards fastest and most effectively. They then deposit on the edge of the vessel.
Separation by means of centrifugal force is, however, faster when the vessel has an insert. Thanks to the insert, the specifically heavier particles deposit faster. The settling path is shortened by the insert. By this means, a higher throughput capacity is attained.
This means: larger volumes of liquid mixtures can be clarified or separated in the same period of time. The more inserts there are, the shorter the settling paths and the higher the throughput capacities.

Huading has provided high-quality centrifuge machines to different industries around the world. From plant extraction to chemical separation - and from low capacity to high - when you think purity, think Huading Separator.