What is Decanter Centrifuge

The decanter centrifuge’s hour has come as soon as the solids content in the suspension to be processed is particularly high. These decanter centrifuges provide the benefits of high clarifying efficiency and maximum dewatering as well as the separation of liquids with the simultaneous removal of solids. The main requirements in this respect include a high bowl speed, a powerful drive for the scroll and a scroll speed which automatically adapts to the solids loading in the feed. Due to its versatility and the technological know-how of Huading Separator, the decanter centrifuge can be used for a wide range of process tasks; from clarification through separation, classification, concentration and washing right up to extraction. 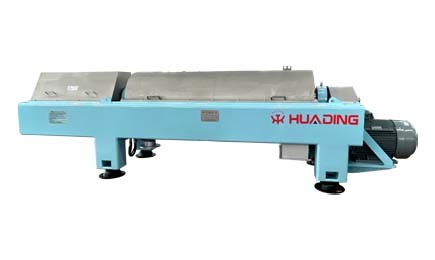 The Disc Decanter effectively combines the respective advantages of decanters and separators in one machine: a disc stack ahead of the liquid outlet in the decanter bowl provides additional… 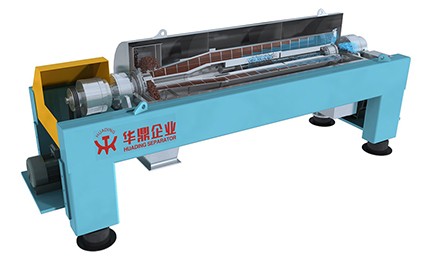 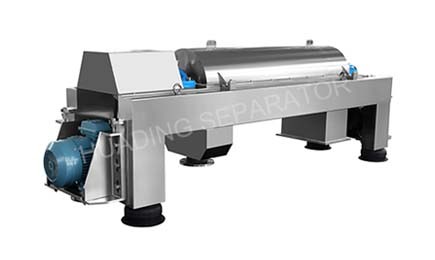 Extraction decanters are a very efficient means of carrying out liquid-liquid extraction with a high solids content. Huading Separator has developed a continuous counter-current… 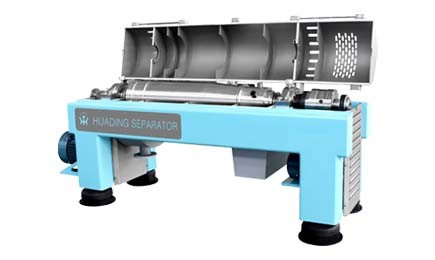 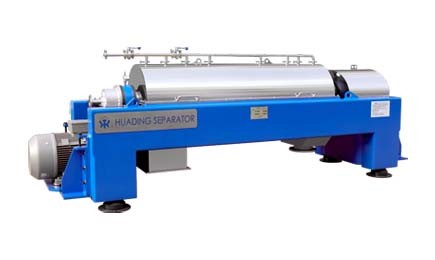 The solid-wall bowl of separating decanter centrifuge has a cylindrical section for efficient separation and clarification of the liquids and a conical section for drying the solids. The product enters the decanter…

The decanter centrifuge is mainly consists of the bowl, the screw conveyor, the gearbox, the frame with the hood, the feeding, and the discharge arrangement.

The bowl in a modern decanter is a cylindrical tube with a flange at either end, on which are bolted at one end the liquid discharge bowl hub. and, on the other end. the cake discharge hub, or the beach followed by the cake discharge hub. The first cylindrical bowls used a filler piece in the end of the bowl to form the beach. On modern bowls. particularly the larger ones, the beach is bolted to a flange at one end of the cylindrical section. although with some overlap to provide mechanical location.
The thickness of the bowl wall is dictated by the material of construction used, the maximum speed at which the bowl will be rotated. and the maximum weight of process material. feed, centrate or cake, likely to be held in the bowl. Thus the density of the process materials in use can have a major effect on the safe working speed of the bowl.

The screw conveyor (or scroll) is in the form of an Archimetlian screw. fitting inside the beach and bowl between the two end huhs. with a small clearance of less than 2 mm ratlially. lt has a number of functions. Not only does it convey the solids, after they form a cake. along the cylindrical bowl section and up the beach, it also accepts the feed and accelerates it up to bowl speed.
In its simplest form, the conveyor has a cylintlrical central hub with a set of flights welded onto it, to form one contirluou 、helix. The conveyor bearings and associated seals are housed in both ends of its central hub. Somewhere in between the bearings will be a chamber called the feed zone, sealed and isolated from both bearings.

The gearbox is a major component of the rotating assembly, which creates the differential speed between the bowl and the conveyor. Usually, the screw conveyor driven by a planetary gearbox turns slightly slower than the bowl.
There are two main types of gearboxes used on decanters. These are the epicyclic gearbox and the Cyclo gearbox.

MAIN AND BACK DRIVE

The main centrifuge drive is usually an electrical motor mounted on slide rails on the frame or sub-frame and connected to the centrifuge drive pulley with V-belts. A purpose built belt guard will cover the two pulleys and belts. Motors on the larger decanters can consume a few hundred kilowatts of power. Such large motors are more often directly mounted on the floor, in which case a special belt-tensioning device is incorporated to allow for the differential movement of the rotating assembly.
The back-drive system is a means of controlling the speed of the gearbox pinion shaft (and thereby the conveyor differential speed) using, for instance, a motor or a brake. This could be offset from the gearbox shaft. in the same manner as the main drive.

Stay in touch with Huading separator

If you need to stay in touch with Huading separator, there are a few ways to do so. You can send an email to info@huading-separator.com, give us a call at +86-510-8783-6501, or fill out the form on our website. We'll be sure to get back to you as soon as possible.