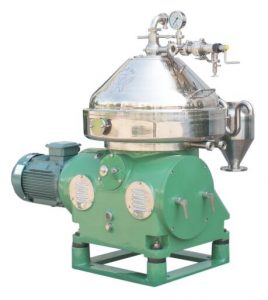 The palm oil Purifier is widely used for the purification of palm oil. The oil is fed from the oil tank to the purifier where impurities and water are removed. After purification the oil passes to the vacuum dryer, and is finally pumped to the main storage tank via an oil cooler.

Separation takes place inside a rotating bowl. The teed is introduced to the rotating centrifuge bowl from the top via a stationary inlet pipe, and is accelerated in the
distributor, before entering the disc stack. The separation of liquid-liquld-solids takes place between the discs, with the oil phase moving through the disc stack to the center and is discharged via a stationary centripetal pump. The water and solids separated from the oil moves out to the periphery, the water is led via channels in the top disc to the paring chamber, where it flows out of the centrifuge via holes in the bowl hood. The solids are collected in the periphery of the bowl, from where it is discharged intermittently. The solids discharge is achieved by a hydraulic system which at preset suitable intervals forces the sliding piston to bend down and thus opening the solids ports at the bowl periphery.